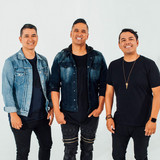 Miel San Marcos is one of the most influential bands in Latin CCM. The band was founded in the year 2000 by three brothers, Josh, Luis and Samy Morales, in San Marcos, Guatemala. With ten albums and original hits, their music has spread worldwide. During their career, the band has traveled to over 20 countries in the Americas, the Caribbean, and Europe, reaching a new generation of thousands who are looking for a deep relationship with God. In 2012, they made history with their ‘live’ recording titled “Proezas,” which brought together thousands at the Anaheim Convention Center Arena. During 2014, Miel San Marcos made history again being one of the few groups to bring together more than seventeen thousand people at the Mexico City Arena for recording “Como en el Cielo.” In 2016 they released their first studio album titled, “Tu Habitación,” and in 2017 they released their most recent album, “Pentecostés” recorded live in New York City’s, Madison Square Garden. The projects “Pentecostés”, “Como En El Cielo” and “Tu Habitación” debuted #1 on iTunes Latino, as well as top 10 on Billboard’s Latin Music Charts. They have been recognized with numerous awards, including the Dove Award (USA), Premio Arpa (México), Premio Arca (Venezuela) and the Visión Music Award (Guatemala) and a Latin Grammy Award nomination. Miel San Marcos continues on tour, selling out arenas and soccer stadiums where they share messages of love & hope to a generation that seeks to change the world.