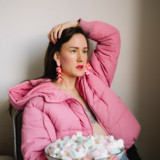 With her lyrics and short novels about millenials and toxic men, Bara Karin has been described as a singing version of Lena Dunham. She is currently working on her next album and music video, this time with a feverish sound telling stories about trafficking, psychiatric care and addiction. Just like in her previous album, Bara Karin experiments with her voice, as less is not always more. Her last album ”I changed my voice for you” was reviewed by Talkabout pop music, Nordik Simit, HYMN and Equalizer Magazine, among others. Together with synths and percussion, the sound of her new album has been described as space pop. Despite corona, she has some upcoming gigs; at Snotty Seaside and Whippet Lab, Stockholm. Bara Karin is also a writer and has been published in magazines like "Skriva" and "Modern psykologi".