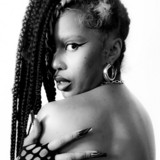 If the future is female, then it has already started. Diana De Brito is the epitome of a new generation of female artists - young, talented and self-confident. In her music, the 22-year-old daughter of an Angolan musician combines timeless soul and jazz in the tradition of Nat King Cole and Erykah Badu with modern trap and R'n'B. She calls it Urban Jazz, some would say it is Neo Soul - it's all true, because IAMDDB is anything but one-dimensional.   Diana grew up under the influence of the late great Bob Marley. She says he has shaped her like no other and made sure that her ears are always awake with a conscious message. At the age of seven, she started writing songs, then seriously producing music in 2015, after immersing herself in Angolan jazz for half a year.   DDBs lyrics are about love, about everyday experiences and above all about empowerment - the art of being yourself and acting for yourself. It's about full creative control - from the music, through to the lyrics, and music videos, the young enigma has earned the right not to pretend.   In 2016, she released her first EP Waeveybby, Vol. 1 with the two successors Vibe, Volume 2. and Hoodrich Vol. 3 featuring hits such as Pause and Shade resulting in her being named one of the BBCs "Sounds of 2018". Flightmode Vol. 4 and Swervvvvv.5 are the next installments of the five volume EP series before the onset of her debut album. WÆVEYBBY mgmt : info.waeveybby@gmail.com