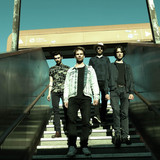 The New Madness (formerly known as The Dead-On) is a rock band. Late winter/early spring of 2017 a small group of people set out to record tracks in a remote house in northern Denmark, spitting out a few demos before deciding on a band name, actually before even knowing they would become a band. Just a few months later they caught attention from Danish legendary label Crunchy Frog who ultimately signed them to a record and publishing deal. Flash forward, a few weeks later

the debut single Lovesick was released and soon after in heavy radio airplay rotation particularly in Germany, Austria and Luxemburg, even landing a spot on the European Border Breakers Chart. The New Madness bridge garage rock and classic rock in a high-octany, hooky vibe with lots of swagger. Bands such as The White Stripes, The Black Keys and Arctic Monkeys are certainly cut from the same cloth as this band, with the exception of an added twist to the normal formation; the bass lines are played on an aggressive little Moog synthesizer adding even more low end and balls to the sound. Add energetic drums and punchy riffs on two electric guitars and you have the recipe for The New Madness.