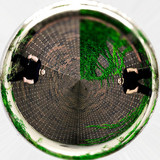 Coppice was founded by Noé Cuéllar and Joseph Kramer in Chicago in 2009, as an inquiry into the capture and generation of music and its relationship to its physical sources. Its compound studies include Bellows and Electronics (prepared pump organs, shruti boxes, and tape processors) between 2009–2014, and Physical Modeling and Modular Syntheses between 2014–2018 – focusing on the interactions between direct and reproduced sound, and the perceptual links between original and emulated sources, respectively. With sustained interest in sound’s capacity to cross domains, Coppice crafts pathways between music and technology in a cross-disciplinary language, resulting in work that is an overarching documentation of music in-formation. Operating in cycles of instrument construction and modification, recordings, and live presentations, its productions incorporate sound design, sculpture, installation, software, photography, and video.