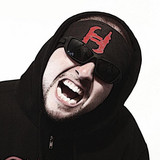 MR.HYDE Hard-Core, NYC based rapper/touring artist well known for his supremely violent, cinematic and raw lyrics & extremely energetic flow. Born and raised in the streets of Queens NY, he had to commonly meet inhumanity first hand at a young age. Hyde's own very real experiences with violence and brutality coupled with a love for boxing, 80's thrash metal and addiction to horror movies greatly stimulated his own memories and ultimately sparked his creative imagination in music. Mr.Hyde is an Integral and consistent mainstay at Psycho+Logical-Records, A label owned and independently run by fellow NYC rapper/producer NECRO. HYDE'S 2004 debut solo album BARN OF THE NAKED DEAD and group album CIRCLE OF TYRANTS were funded and produced by NECRO & are held in high regard as underground cult classics. MR.HYDE'S ferocious, but ever evolving, cutting edge style continues to be on full display over the years. His other solo endeavors include; 2008's CHRONICLES OF THE BEAST MAN, 2012's IF IT BLEEDS WE CAN KILL IT, 2016's EVIL NEVER DIES, & 2019's THE BOOGEYMAN IS REAL. HYDE is married to fellow Indie artist CHERIE RAIN. The 2 have a newly released 2021 group album titled BONNIE & HYDE , which is currently available on all digital platforms. Mr.Hyde’s Newest SOLO Single “NIGHTBREED” is Now Live On All Platforms. Signed Cds & Posters along with other Mr.Hyde music & merchandise is available at: MRHYDEMERCH.COM