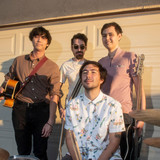 Marube is a four-piece indie rock band from Los Angeles California. It began as an acoustic solo project by Kazu Glascock. His influences include Mark Kozelek, and Nick Drake. Their style of fingerpicking and dreamy atmosphere shaped his guitar playing. After releasing Melancholy Headspace, Kazu formed the core lineup. This included his older brother Taka Glascock, as well as his friends Sami Bishlawy and Ben Kray. They have played many shows around the L.A. area and bring a unique melancholic sound to the stage.