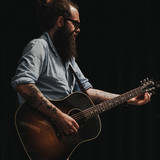 John Allen is many things, musician, troubadour, guitarist, piano player, storyteller and entertainer. With his emotional and gravelly voice, with his intriguing and often witty lyrics and with almost 700 shows under his belt, Allen has seen the highs and lows of touring and performing. Based in Hamburg, Germany, Allen has created a large and devoted fanbase. He continues to tour, to write and to perform. Additionally, Allen is working on a novel. Allen‘s new album (Love) Letters offers the intimacy of his solo performances and will be released through Gunner Records in late 2021.