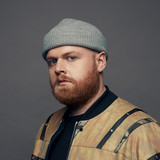 Tom Walker, winner of the BRITs ‘British Breakthrough Act’ 2019, has taken the charts by storm this year with the release of his Number 1 debut album ‘What A Time To Be Alive’. Both previous singles taken from the album ( 'Leave a Light On' and 'Just You and I'') certified Platinum. The album title, ‘What a Time To Be Alive’, is taken from one of Tom’s best-loved songs, ‘Blessings’, and is indicative of the hope and optimism that permeates this blistering 12 track collection of original songs written or co-written by Tom and sung in his unmistakable voice. One of the unique things about Tom Walker is the way his songs resonate with his fans. Tom has been overwhelmed by the response he’s had on social media and at shows to ‘Leave A Light On’, and the hope it has given listeners the world over. ‘Just You and I’ has already become a wedding staple as well as hitting no.3 in the UK Singles Chart. The album sleeve, created by the innovative artist Craig Alan, features an extraordinary portrait of Tom comprised of over 2000 miniature figures of people, many of whom have influenced Tom throughout his 26 years on the planet. www.iamtomwalker.com