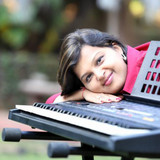 Priyanka Lalwani is a multi-talented Indian singer / songwriter, composer, and producer based out of San Francisco, California. Her vocal training and range is eclectic and diverse, and traverses an impressive array of genres. She is a Hindustani Classical Vocalist trained in Khayal, Abhanga, Ghazals, Thumri, Bhakti Geet and Cinema Sangeet. On top of her vocal talents, Priyanka is also a gifted musician and is an expert on a number of instruments including the harmonium, keyboard, guitar, mouth organ and the flute. Her artistic prowess garnered so much attention that she was invited to help judge at Anahat, a prestigious South Asian A-Capella Music Competition hosted at Cal State Berkeley. She has participated in and performed at music concerts around the world, some of these include festivals in Pune, Mumbai, Nashik and has also performed German Folk Music in Munich, Germany. In March of 2014 she released her debut track entitled “NA JAANE”. Priyanka controlled every aspect of the song from conception to release. She wrote, produced, arranged, composed, and performed the track, which has been described as self-effacing yet captivating. After the release of “NA JAANE” Priyanka was interviewed on 1550AM Radio Zindagi in the San Francisco Bay Area. In 2005, her debut song ‘Na Jaane’ won Academia Award – Best Song Award in Pop Electronica-Hindi. She also garnered attention and achieved an honorable mention in Mi2N (Music Industry News Network).