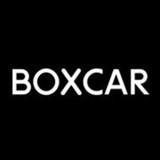 in Brisbane, Queensland, Australia, in 1986 with Carol Rohde (vocals, keyboards). Brett Mitchell (keyboards) and Crispin Trist (percussion) The band continuously performed in the then rock-dominated Australia to little success but after releasing some cassettes (PCM) signed with Volition in 1988. The label released Boxcar's first single, "Freemason," which became a smash hit in clubs later that year. The track landed at number eight on the Billboard dance charts. In 1990, Boxcar recorded their debut album, Vertigo. "Gas Stop (Who Do You Think You Are?)" was another hit on the Billboard dance charts, peaking at number 13. Rohde and Trist departed from Boxcar in 1992, replaced by Stewart Lawler (synthesizers). In addition to working on songs of their own, Boxcar remixed singles for Single Gun Theory, the Models, and Severed Heads in the early '90s. Boxcar released their second full-length, Algorhythm, in 1994 containing club hits "Universal Hymn", "What Are You So Happy About?" and "People Get High".