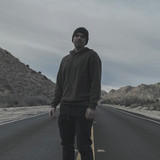 Cleveland-based rapper LOGVN started writing at age 15, years before his first official release in 2017. He has been building an audience ever since. Growing up in the small town of Brunswick, Ohio, LOGVN has been written about on blogs all across the world, shared on thousands of playlists, and even worked with Grammy-winning producers. As well as placing in the 'Anno Domini Song Contest 2019' as one of the best artists in the nation. Growing up, LOGVN had to battle a debilitating stutter. Years of speech therapy seemed futile as the issue never improved. Hardly ever able to speak his mind, he turned to music as a release of the constant voicelessness felt every day. It wasn't long until he realized he didn't stutter while singing or rapping, and in fact, used it as his own version of speech therapy. Logan Newark began rapping under the name LOGVN, gaining attention with a fast-paced, lyrical, and aggressive sound comparable to that of Eminem, Kendrick Lamar, NF and Machine Gun Kelly. The sonically intense rapper's music is heavily inspired by his own life. Growing up poor and borderline homeless with an absent father, a debilitating stutter, and countless near-death experiences, LOGVN has seemingly defeated all odds to get to where he's at today. LOGVN's music is meant to inspire others going through difficult times and hopefully, provide the fire that is needed to overcome their own obstacles. Already headlining concerts, LOGVN is off to a hopeful start to his career.