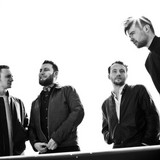 To Kill A King

Featuring To Kill A King

"Oh my love, we are destined to demise. But that don't matter. What matters is now. Oh my love..."   Formed in 2009, To Kill a King is an Indie Rock band made up of members Ralph Pelleymounter (vocals, guitar), Grant McNeill (guitar), Ben Jackson (keys), James Ball (bass) and Joshua Taffel (drums).   To Kill A King have released three acclaimed albums, 2013’s ‘Cannibals With Cutlery’, 2015’s self-titled follow-up ‘To Kill A King’ and 2018’s ‘The Spiritual Dark Age’. They band toured incessantly for the majority of their ten year career and are currently on a touring hiatus while frontman Ralph Pelleymounter released his debut solo album, wrote with Rag’n’ Bone Man and Zibra and keyboardist Ben Jackson has been producing albums for Childcare and Little White Things. In 2020 they have been releasing ten previously unreleased songs from their catalogue to celebrate ten years as a band, including collaborations with their good friends Bastille.