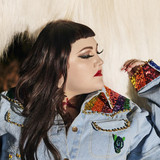 First known as the non-conformist lead singer of the Gossip, Beth Ditto became just as famous for challenging the perceptions of female beauty and sexuality as she did for her spellbindingly raw voice. Born Mary Beth Patterson in 1981, she grew up in a tiny house in Searcy, Arkansas before moving to Washington at the age of 18, where she teamed up with guitarist Nathan Howdeshell (aka Brace Paine) and drummer Hannah Blilie to form the Gossip. After being named "the coolest person in rock" by NME, one of three publications she posed nude for (alongside erotica magazine On Our Backs and London style bible Love), the band broke through to the mainstream with their third album's title track, "Standing in the Way of Control," written by Ditto as a response to the U.S. government's ban on gay marriage. Ditto's larger-than-life, uncompromising image turned her into a fashion icon, a development which resulted in her opening Jean Paul Gaultier's Spring Collection at 2010's Paris Fashion Week, and creating her own collection for U.K. retailer Evans. After providing guest vocals on records by Calvin Johnson ("Lightning Rod for Jesus"), Simian Mobile Disco ("Cruel Intentions"), and Jarvis Cocker (a duet cover version of Heaven 17's "Temptation"), she released her solo self-titled EP in 2011. Ditto also had her own advice column in British broadsheet The Guardian, launched a campaign to ban the clothing size "zero", and formed supergroup Crisis with Paul Weller and Graham Coxon to raise money for a homeless charity. In 2012, Ditto released her memoir, Coal to Diamonds, which she co-wrote with Michelle Tea. That year, the Gossip also released their sixth and final album, Joyful Noise; the group disbanded in 2015 when Howdeshell returned to Arkansas. Ditto returned to music with the single "Fire," which appeared on her debut solo record Fake Sugar. Released in June 2017, the album found Ditto embracing her Southern roots as well as the punk, pop, and disco she'd explored with the Gossip. ~ Jon O'Brien, Rovi