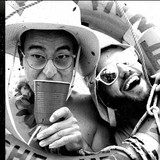 Melonvine is the brainchild of New Brunswick, Canada’s Derek Thibeault. While wearing 90’s influences on its sleeve, Melonvine is aggressively pushing the alt-rock envelope in a hook-laden new direction. Still ticking the boxes for guitar amps pinned, and drums full tilt, its Thibeault’s melodies and chord progressions that are the star of the show.