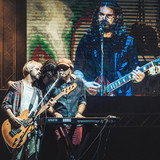 Robin and the Backstabbers

Featuring Robin and the Backstabbers

Robin and the Backstabbers is a Romanian rock band gathered in 2010 after a week-long solitary hike in the Călimani mountains by front man Andrei Robin Proca. They describe their music as “melodramatic pop”. Robin initially wanted to form a cover band that would only play songs from Paul Simon’s album “Graceland”, but this didn’t happen after all. What did happen was that his friends Vlad Feneșan and Florentin Vasile answered his call to arms, together with Vladimir Proca, Robin’s younger brother. Their first gig was in Bucharest on April 28th 2010, which would become the band’s official birthday. After 8 #1 singles on national station Radio Guerrilla and a hit debut album in 2012, they released their second studio record in 2015, Arhanghel’sk, the second part of the upcoming trilogy Bacovia Overdrive.