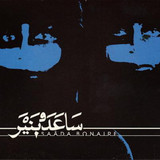 Saâda Bonaire was an art concept project formed in Bremen by DJ ralph "von" richthoven, vocalists Stephanie Lange and Claudia Hossfeld in 1982. Saâda Bonaire's objective was to combine punk, new wave, reggae, dub, disco and arabian music into a string of otherworldly thought provocative dance floor hits. Shortly after its conception in 1982 the group was signed to EMI Germany. London based dub wizard Dennis Bovell produced the group's only single "You Could Be More As You Are". Unable to comprehend project's music and enraged by the production cost of the single, EMI dropped the group one week before the release of the 12". The single came and went unnoticed. Label-less, the two girls and Richthoven continued recording before finally calling it quits. In 2012 the band „Thieves Like Us“ heard the EMI single and went digging for answers about the mysterious group Saâda Bonaire. In 2013 Captured Tracks released a self titled double lp which compiled fourteen unreleased songs and the EMI single. In 2015 the follow up EP "Covers“ was pressed on limited edition vinyl. Hossfeld and Lange's sultry melodic vocal delivery, pumping drums & bass and Richthoven's ground breaking sonic production obscure any trace of philosophical and political texts. Who would have guessed that decades later Stephanie Lange and Claudia Hossfeld of Saâda Bonaire would be perceived as early icons of feminist pop poetry. Saâda Bonaire was simply in the wrong place at the wrong time.