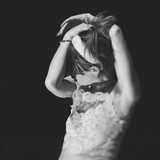 Elsa Hewitt is an English music producer, songwriter and artist. Hewitt began recording her own songs as a young teenager, following her natural inclination to create effects and atmospheres organically using whatever would be available. She progressed through fronting post-punk bands to solo electronic songwriting, developing her ear for aesthetic and passion for album-making all the while. In 2021 she released her seventh cross-genre electronic album LUPA. After a great deal of experimentation with resampling and remixing her own recordings and songs, her sound has come to comprise ambient, experimental dance, avant-garde, lo-fi, alternative techno and hip-hop, modern classical and folk-tinged songwriting. She officially embarked on her professional career in 2017 after winning the Lynsey de Paul Prize. What followed was a chain of entrancing releases: distinct yet interlinked philosophical worlds, each one holding its own tones of esoteric beauty and abstract darkness. In 2017 Hewitt produced the 'Becoming Real’ album trilogy: ‘Cameras From Mars', 'Dum Spiro Spero’ and 'Peng Variations’ via her own imprint ERH; single 'Invisible Threads' (Saffron Records) and minimal instrumental EP 'Quilt Jams' (ERH) in 2018; effervescent dance album 'Citrus Paradisi' in 2019 (ERH and reissued on Lobster Theremin in 2020); ambient EP 'Ghostcats' (ERH) in 2020 and experimental electronic art pop album 'LUPA' in 2021 (ERH and Tompkins Square).