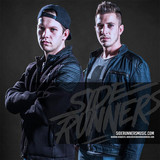 Dániel and Balázs have been working together for nearly 10 years under different aliases and in different music genres. Their main musical path since 2012 is hardstyle, under the name “Siderunners”. They have won several dj and producer contests in Hungary and started to represent themselves and hardstyle on bigger and bigger events – since then, they’ve become the most notable hardstyle act in the hungarian electronic dance music scene. They’ve played in the most known clubs and open-air event venues in Hungary, having references like PartyStrand (Siófok), Liget Club, RIO Café, RIO XXL, or the austrian Eventhouse Leobersdorf. They’ve shared the stage with the biggest names in the hard dance scene like Headhunterz, Psyko Punkz, Paul Elstak, Malice, Brennan Heart, Art of Fighters and so on. Thousands of people partied along to their energetic, hard, yet danceable sets.