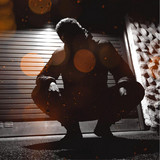 Producer and songwriter ALESTI hit the ground running with debut single 'Burn' in May 2018. The year ended on a high note with the release of the debut EP 'Elements' which would go on to rack up nearly 2 million streams

in its first year on Spotify alone. ALESTI captures a unique and modern brand of alternative metal, inspired by the ambience of post-hardcore and sprinkled with elements of electronica. Different world class vocal talents are featured on each track. ALESTI has featured artists such as Rory Rodriguez (Dayseeker), James DeBerg (Thousand Below), Andy Cizek (Monuments) and Julian Comeau (Loveless)