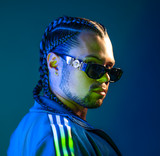 Gianni Blu is the 27-year-old Italian-Haitian-Venezuelian DJ, producer and songwriter from Chicago. Gianni began playing the violin and drums at a young age, and then transferred his interests toward DJing and producing when his creative desires expanded past the boundaries of traditional instruments.  Since 2017, Gianni Blu has charted in over 37 countries, generated over 30 million + streams, and has been supported by the likes of Mixmag, Dancing Astronaut, and EDM.com Blu’s been touring domestically and internationally alongside top electronic/dance artists and his sets are known for mixing a multitude of genres into a dynamic, high energy performance.   Follow on Socials @GianniBlu