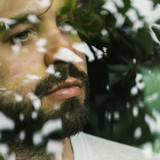 Ben Osborn is a composer, poet and multi-instrumentalist. Already known as a composer for theatre and film and a lyricist and librettist, 2019 saw the release of his debut album Letters from the Border alongside a string of collaborative releases. Channelling Leonard Cohen-esque balladry, Ben draws also from electronica, folk and 20th century art music. Ethereal string sections rise and fade, Björk-like beats skitter, Erik Satie piano chords drift into view: in less capable hands it might sound miscellaneous, but he weaves his disparate influences into textural tapestries that sound like nobody but him. The highly acclaimed debut album Letters from the Border was the result of an extraordinary musical partnership with producer and violinist Alex Stolze. The album was created in two months at the remote Nonostar Studio on the German-Polish border. Among accolades from journalists, radio DJs and music lovers around the world, the album was listed in the top 10 albums of 2019 by Curve Ball Radio and the title track was nominated for an International Songwriting Award.