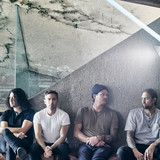 In 2005, when pop-punk superstars blink-182 announced their indefinite hiatus, the band split into two side projects: +44 and Angels & Airwaves. The latter group, fronted by Tom DeLonge, went in a synth-friendly, arena rock direction, debuting in 2006 with We Don't Need to Whisper. By the late 2010s, DeLonge had officially parted ways with blink, and Angels & Airwaves was a full-fledged entity with half-a-dozen releases in their catalog, including the two-part Love series and 2014's The Dream Walker. After a short break, DeLonge resurrected the project in 2019. With the hiatus of pop-punk superstars blink-182 in full effect by the fall of 2005, singer/guitarist DeLonge revealed the formation of his new band -- one he'd already been working with for six months -- called Angels & Airwaves. DeLonge proclaimed that his new music would borrow arena-sized elements from bands like U2 and Pink Floyd and, ultimately, be something of a revolution to change the face of rock & roll forever. Rounding out his lineup were guitarist David Kennedy (Boxcar Racer, Hazen Street), drummer Atom Willard (Rocket from the Crypt, the Offspring), and bassist Ryan Sinn (the Distillers), and the group made their live debut on April 12, 2006, to a sold-out crowd at Pomona, California's Glass House. Those unable to attend the show were given a taste of Angels & Airwaves' shimmering, arena-ready rock later that spring, when We Don't Need to Whisper was released on the Geffen label. The album was met with mixed reviews but went gold nonetheless, due in large part to a popular presale that ensured the band a healthy first week of sales. Several U.K. festival appearances and a month-long headlining tour followed, and the group also served as an opening act for Head Automatica and Taking Back Sunday during a tour of American venues. After replacing Sinn with former 30 Seconds to Mars bassist Matt Wachter, Angels & Airwaves returned in 2007 with their second album, the equally dramatic I-Empire. Although deemed by DeLonge to be "as exciting as rock 'n' roll gets!" in an interview with Kerrang!, I-Empire didn't fare nearly as well as the previous album, with sales eventually stalling around 260,000 copies in America. A stateside tour in early 2008 proved to be fairly popular, though, and the group remained on the road by joining the Warped Tour later that year. At the Grammy Awards on February 8, 2009, DeLonge climbed on-stage with Travis Barker and Mark Hoppus to announce plans for a blink-182 reunion. The band toured that summer and spent a significant amount of time in the recording studio, where sessions for a new blink-182 album kept DeLonge busy. He found enough free time to record a third album with Angels & Airwaves, however, and the finished product -- simply titled Love -- was released free of charge on Valentine's Day 2010. The second part of Love arrived in November 2011, not long after DeLonge released his reunion album with blink-182, along with a set that combined both parts of the album. The next stage of Angels & Airwaves began in April 2014, when DeLonge announced plans for another ambitious multimedia project. During the recording of the album, bassist Wachter left the band and was replaced by ex-Thrice member Eddie Breckenridge. The new album, entitled The Dream Walker, appeared in early December; it debuted at 39 on the Billboard 200. Also in 2014, blink-182 were purportedly in the planning stages of recording another album. However, in 2015, Hoppus and Barker revealed via Rolling Stone that they had parted ways with DeLonge and replaced the guitarist with Alkaline Trio's Matt Skiba. DeLonge then responded via social media that any decision for the band to move forward was made without him. Following the split with blink-182, DeLonge revealed to fans that he would release two Angels & Airwaves albums -- as well as two solo efforts -- in 2015. He managed to release a single Angels & Airwaves EP in September (...Of Nightmares) as well as his first solo album, To the Stars: Demos, Odds and Ends, which featured demos recorded for both blink-182 and Angels & Airwaves projects. The second promised Angels & Airwaves effort was issued in April 2016. The Chasing Shadows EP debuted in the Billboard 200 at number 109 and was paired with a novel of the same name, written by DeLonge and A.J. Hartley. The group returned three years later with a new lineup -- DeLonge and Kennedy now joined by Ilan Rubin -- and a new label, Rise Records. They issued the synth-washed single "Rebel Girl" later that year, with "All That's Left Is Love" arriving in 2020. ~ Corey Apar & Andrew Leahey, Rovi