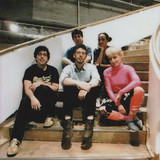 Ava Luna is Carlos Hernandez, Felicia Douglass, Ethan Bassford, and Julian Fader. The group has always been a conversation between its members; sometimes inward-facing, but always uniquely worth eavesdropping on. Soul and funk, krautrock, post-punk, R&B, gospel and even reggae influences all bounce off each other in sync with each participant’s idiosyncratic background and interests. With Moon 2, that specificity has only tightened but, as in any relationship that has existed for the better part of a decade, the conversation has evolved. Since their previous release, 2015's Infinite House, the members of Ava Luna have ventured out in different directions: Douglass, who also plays with indie stalwarts Dirty Projectors, makes her own music with Bassford and guitarist/producer Erik Gundel as Gemma, a lush space that foregrounds her magnetic vocals. Hernandez and Fader run Gravesend Recordings, and have produced/collaborated on dozens of other artists' records in the meantime, including Mr Twin Sister, Frankie Cosmos, and Palehound.