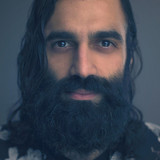 Blending rock solid talent behind the decks with borderless artistry in the studio, Siavash has emerged as one of the pioneers of the Northwest electronic music industry. He is accredited as an innovator of the Canadian underground scene, but his fans love him most for his powerful, brilliantly skillful performances and magnetic presence. Admittedly cheesy tagline ‘last night Siavash saved my life’ echoes real sentiments of the many people who have reached out to describe his sets as deeply therapeutic and even salvational in times of need. Spanning a variety of genres, this wizard has crafted his global music career since the vinyl-only days of the early 90's. After being crowned the city’s renegade King with his infamous Club Bed, he moved on to define the sound / image of Gorg-O-Mish Afterhours sculpting it to record success until pivoting his attention. Back on tour, he now plays regularly at top venues and festivals around the world, including BPM, Sisyphos, Lightning in a Bottle, Thuishaven, Club Space, and is currently a resident at Latin America’s most legendary club, BarAmericas. When back home, Siavash devotes his time to his other brand You Plus One. From its humble beginnings as an events company, it has since grown into a record label with massive world-wide support. Today Siavash hosts the city’s hottest and most mysterious private events at YPO’s unique HQ the HAUS: a very personal ongoing project which holds his own kooky artwork and world-class soundsystem