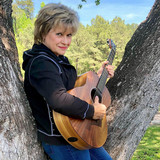 EG Kight is “one of the blues’ most respected vocalists,” according to the Sarasota Herald-Tribune. Over the years she’s emerged as a preeminent voice in roots music. With her rich vocals, well-crafted songs, and inimitable sense of humor, Kight has entertained around the world, and has received multiple music industry nominations. Many artists have recorded Kight’s songs, and some of them have landed on Grammy nominated albums, four major TV networks, and in a movie. A veteran of the road, recently Kight decided to get back to her acoustic roots, so she formed a trio with two of her band members - percussionist Gary Porter and guitarist Ken Wynn. Kight stated “This new trio excites me in a way I haven’t felt before. The three of us have performed together in a band for over 20 years, and Gary and Ken are like brothers to me. This stripped-down version allows for a tighter show, with sweet harmonies, and a more acoustic sound. We’re having a great time venturing out into some new musical areas, and the audiences seem to love it! We can't wait until the next show!" ----------