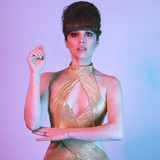 Raised in the once-opulent oasis of Beirut, Maya grew up surrounded by glamour and the international high life. However, while a young schoolgirl she was subject to regular bombings from Syrian, Israeli, French, British and US forces as the world around her descended into chaos. Confined to taking cover

in window-less hallways and other forms of shelter, she found sanctuary in her headphones, with Depeche Mode and Blondie on repeat. This soundtrack to her homeland falling apart around her, and her forced migration to the UK as a refugee, has led to the incarnation of New Pharaohs and their debut single ‘Empire’ – an astonishingly honest song, exploring complete love under total surrender. Maya first made waves on the UK music scene in 2003 with the electronic indie-punk band Sohodolls, picked up by Alan McGee (Oasis, Creation Records), who enjoyed considerable international success leading to Maya’s songs featuring in Gossip Girl, Californication, Nip/Tuck, Vampire Diaries and even the Super Bowl. As a songwriter Maya also co-wrote the hit song ‘Beat Of My Drum’ for Girls Aloud member Nicola Roberts. However, seeing Syria fall apart once again in recent years has evoked memories too poignant to ignore. Birthing New Pharaohs, Maya channels her roots and delivers a heartfelt new record awash with 70s and 90s sounds drawing inspiration from artists such as The Eagles, Fleetwood Mac, Serge Gainsbourg, Pixies, The Cardigans and Lana Del Ray.