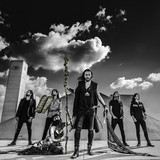 One of the most revolutionary bands in the history of heavy music, Orphaned Land are an unstoppable force. Formed in Israel in 1991, these self-proclaimed ‘Oriental metal’ artisans have spent the last 26 years working tirelessly to use their creative endeavors as a means to spread a positive and peaceful message.Over the course of five conceptually deep and musically ingenious albums, the band have been true to their word, uniting fans across the Middle East and beyond, the band won UK magazine Metal Hammer’s ‘Global Metal’ award in 2014 With fans spread across the globe, not least a diehard fan-base across the Arab world, the band’s quest for truth, love and hope has clearly made a remarkable impact as one of the greatest metal bands on the planet. It seems safe to say that Orphaned Land are far from the average metal band. In 2018 they will once again prove the uplifting and unifying power of their extraordinary music. Several years in the making, Unsung Prophets & Dead Messiahs marks another high watermark for Kobi and his band mates. Inspired by the writings of Plato and the thwarted aspirations of peaceful revolutionaries throughout history With guest appearances from prog-rock-legend Steve Hackett (ex-Genesis) and metal luminaries Hansi Krüsch (Blind Guardian) and Tomas Lindberg (At TheGates/The Lurking Fear), Unsung Prophets & Dead Messiahs is an artistic toured-force from a band with a formidable and furious sense of purpose.