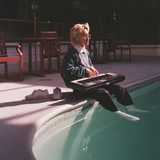 If J Dilla, Herbie Hancock, Prince, and Weather Report had a mutant indie baby, it would be William Corduroy. The California crooner and songwriter blends that super groovy late-70s vibe with a modern twist, providing a sonic pleasure to the ear and a warm, chakra-unblocking experience to the soul. Recording and producing all of his tracks in his bedroom, William Corduroy started out as a boredom experiment in late 2017 after being kicked out of college for tagging a wall and losing a full-ride music scholarship. Will decided to make use out of his empty time and write music based on the events that transpired and his emotions in its wake. Fast-forward to now, Will has found a unique sound in the indie world. His previous-released debut EP, "Wilson," via thecancershit, has been hailed as "a diverse and impressive array of sounds" by Elevator Magazine. Will has supported the project with by playing a variety of sets with his live band, taking his jazz influence a step further with the added saturation of a saxophone and mix of trained jazz musicians. On stage, the music takes a left turn into a field of improvisation while still keeping to the roots of indie-pop.