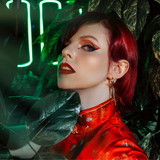 Alice Goes To Motherland - alternative rock / pop rock band. Imagine you take Thirty Seconds to Mars and Gwen Stefani, throw away Jared Leto and bring in Jeffrey Star - let him play bass. That's it, you get Alice Goes to Motherland. Sexy frontwoman, androgynous bassist, brutal forester-guitarist and powerful but sweet and stylish drummer - these four hits the stage with a real show. While some songs are giving you goosebumps, others make you jump and dance with joy and there are also a few that could lead to an involuntary orgasm. In the end, everyone gets their sort of satisfaction, inevitably. The band have released 1 full album, 3 singles and several live-videos. Two more releases are planned for spring 2020: a new single "Adore" and music video "Heroin(e)", which was filmed in June 2019 with more than half a budget raised with help from fans via crowdfunding. Upcoming events for 2020 include a tour in Canada in May and participation in Canadian Music Week, one of the biggest showcase festivals in North America, and in September - a tour in Sweden and participation in Live at Heart showcase there. Follow us: YouTube: https://www.youtube.com/channel/UCwuaGJP3bwdyZZPkLth6U8w VK: https://vk.com/agtm_official Instagram: https://www.instagram.com/alicegoestomotherland/ Facebook: https://www.facebook.com/agtmofficialpage Official website: alicegoes.com