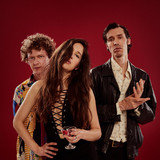 A trio of old friends and long-time musical collaborators, Marie Davidson, Pierre Guerineau and Asaël R. Robitaille share many things in common (with the former two also being married to one another, and writing & performing together as the group Essaie pas.) Each of them has made waves in electronic and experimental corners of the music industry; often working together, for labels like DFA, Cititrax, Holodeck, Orange Milk and Mind Records. But they’re also devotees of classic pop songwriting, and they created Marie Davidson & L'Œil Nu to celebrate and reimagine those shared musical touchstones. If there’s a mood that encapsulates L'Œil Nu, it’s the one to be found at 3AM, after a long night of drinks, when it’s time to start putting on the classics. This, for Marie, Pierre and Asaël, means Fleetwood Mac, Rush or soundtracks from French cinema, and it was in one such moment that the germ of the idea for L'Œil Nu was planted. Later evolving and growing to encompass something bigger: to be a band, to write songs and to approach music from a pop perspective.