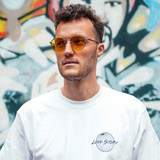 Maxi Meraki puts bright tones in his releases and sets, just like he’s known for always being smiling. When you hear this Belgian DJ and producer play you can feel connections between raw disco beats and melodic house. A real symbiosis between the old school sound and new melodic beats. Releasing his first tracks in 2019 on his own label ‘Meraki Records’ and 2 Dutch label’ ’72 Pixels’, he later on released his first EP in the summer of 2020 on Tensnake’s True Romance Records. Maxi Meraki’s tracks are supported and played by Roger Sanchez, Mark Knight, Todd Terry and BLOND:ISH.