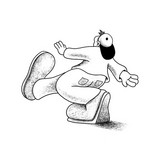 A frenzied convergence of post-punk danceability and noise rock abrasiveness, Dope Body's sound straddles that fine line between a tightly packed dancefloor and a mosh pit. Evoking some kind of fantasy world where the Jesus Lizard cover Gang of Four while playing through a blown-out PA system, the Baltimore, Maryland quartet ran their influences through a sonic blender on albums like 2012's Natural History. After briefly breaking up in 2016, the band reunited for a few shows in 2019 and were back with a new studio album, Crack a Light, by 2020. Dope Body formed in 2008, made up of bandmates Andrew Laumann, David Jacober, Zachary Utz, and John Jones. They initially intended to play only one show, but the group chemistry was so strong they quickly decided to invest more time in the project. The band released an impressive amount of material in a short time, starting with the 2009 EP 20 Pound Brick, which was released on Watercolor. They followed up with the split EP (on Orphan) Self Entitled through Black Tent Press in 2010 before making their full-length debut the following year with Nupping. Dope Body's years of basement and eardrum destruction eventually paid off in 2012 when they hooked up with indie giant Drag City to release their second full-length, Natural History. After relentless touring, the group returned in 2014 with Lifer. They recorded a wealth of material for the album. Deciding that much of it was too good to abandon, the band did some editing and a little extra recording, but otherwise compiled 2015's Kunk from Lifer's inspired leftovers. Preceded by the single "Old Grey" in June, the album was released two months later. In April 2016, Dope Body announced they would be breaking up after playing a few farewell shows in Baltimore. Afterwards, the members of the band focused on individual side projects and non-musical creative pursuits for a time, but they regrouped in 2019 for some reunion shows. After these shows went well, the group got back into full swing, quickly releasing the lo-fi, mixtape-like album Home Body in May 2020. Recorded and mixed quickly during the quarantines brought on by the COVID-19 pandemic, Home Body's frenzied sounds often centered around themes of isolation and restlessness. Before the year was up, Dope Body returned with Crack a Light, their second album-length release after reuniting. The record arrived in October 2020 on Drag City. ~ Gregory Heaney & Fred Thomas, Rovi