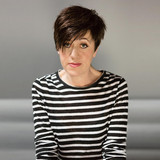 One of pop’s best-loved singer-songwriters, Tracey formed lo-fi cult girl group Marine Girls in 1980. In 1981 she met Ben Watt and they formed Everything But The Girl. A year later she released acclaimed minimalist solo debut, A Distant Shore. With Marine Girls disbanded, Tracey switched focus to EBTG. From 1984 - 1999 the duo sold nine million records including their biggest hit, Missing (Remixes). She also guested with other artists, most notably Massive Attack on Protection. After a 7-year break to raise a family, she restarted her solo career in 2007 with Out Of The Woods, followed by 2010’s Love and its Opposite produced by Ewan Pearson, a remix album in 2011 (Extended Plays 2010 - 2011) and a cover of The xx’s Night Time EP. Her Christmas album, Tinsel and Lights - a set of alternative seasonal songs by artists including Sufjan Stevens, Randy Newman and The White Stripes plus two originals - was issued in 2012. In 2013 Virago published her best-selling debut memoir, Bedsit Disco Queen. 2014 saw two low-key releases - the Molly Drake Songs EP and a cover of Kate Bush’s Under The Ivy. She wrote and produced

Songs from 'The Falling' - the original soundtrack for Carol Morley’s fêted debut movie, The Falling - in 2015. She has also recently guested on tracks for John Grant, Tevo Howard,