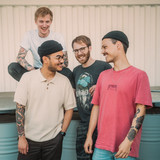 Since forming in late 2015, SHORELINE have worked their way into the european music scene, with heavy songs rooted somewhere between the emo-revival and punkrock. Their debut LP “Eat My Soul” (Uncle M Music, 2019), featured in WDR Rockpalast, Alternative Press, and included supports for Basement, Hot Water Music, Spanish Love Songs and over 200 shows on the mainland and UK, paving the way for SHORELINE’s newest single KONICHIWA. The single tells the story of anti-asian racism from the perspective of Hansol (he/him), who is of Korean descent. Hansol is talking about his experiences with racism, daily microaggressions, yellow fever and how growing up as an asian in a western country led to him struggling with self-worth and cultural identity. SHORELINE teamed up with asian-american Singer-Songwriter KOJI (they/them) to work on the song. KOJI and Hansol met on tour in Germany 2019, exchanging their experiences and perspectives on being part of asian diaspora. KONICHIWA is out on 27.08.2021 via END HITS RECORDS