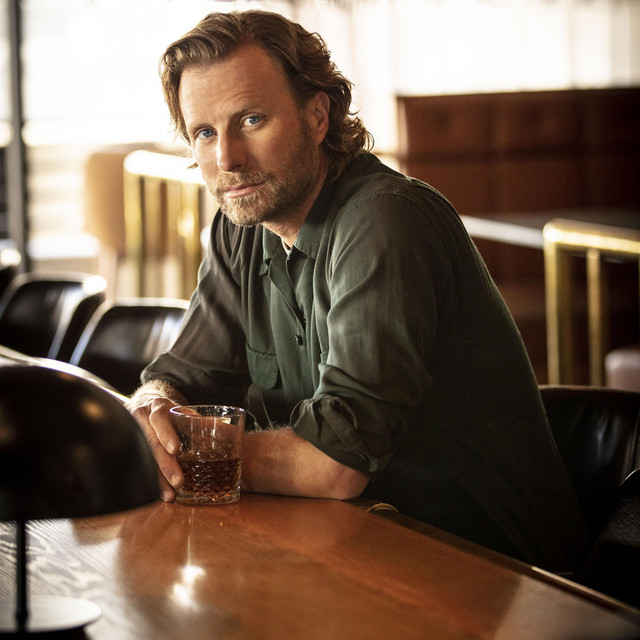 Dierks Bentley rocketed to the top of the country charts with his driving 2003 debut single "What Was I Thinkin'" in 2003, opening up a career where he'd remain in the Top Ten year after year while simultaneously taking musical chances. Occasionally, Bentley dipped into his roots -- his 2010 album Up on the Ridge was largely devoted to bluegrass -- but his music was distinguished by how he blurred borders separating country, rock, and pop. Sometimes, Bentley's hits conveyed this sense of wanderlust -- this is especially true of such early hits as 2005's "Lot a Leavin' Left to Do" and 2007's number one "Free and Easy (Down the Road I Go)" -- yet he also had a knack for ballads and beachy good times, the latter crystalized by "Drunk on a Plane," a 2014 number one that crossed over into the pop Top 30. Bentley occasionally emphasized his sense of humor, as when he and his band masqueraded as the '90s country parody group Hot Country Knights, and whenever he did, he wound up highlighting how his catalog encompassed a broad range of emotions and musical styles. Growing up in a non-musical family in Phoenix, Arizona, country singer Dierks Bentley got his country music education on his own listening to records. A love of the music inspired him to move to Nashville at the age of 19, but he quickly grew discouraged by the lack of public and professional interest coming his way. It all changed when he walked into the Station Inn, a bar where the bluegrass faithful hung out. An all-night jam session recharged his batteries and he again started pursuing gigs. He landed a job at the TNN television network doing research on classic country, and by night he worked on his demos. Capitol finally heard the artist, signed him, and released his self-titled debut, Dierks Bentley, in 2003. It yielded the impossibly catchy single "What Was I Thinkin'?" Bringing his love of Merle Haggard and Waylon Jennings to the forefront, Modern Day Drifter followed two years later and became a Top Ten hit. In 2006, he returned with Long Trip Alone, a more polished effort that was commercial but not crass. Greatest Hits: Every Mile a Memory arrived in 2008. Although it was perhaps a bit early in his career for a compilation, it did contain his key charting singles and added fan-selected live tracks as a bonus, making it a nice summation of Bentley's work up to that point. His fourth album, Feel That Fire, was released in early 2009, followed by the bluegrass-themed Up on the Ridge in 2010. Bentley's sixth album, Home, released in 2012, featured a dozen new songs that the singer road-tested on tour. It was an eclectic and varied affair, with guest spots from Little Big Town's Karen Fairchild and Tim O'Brien and Sam Bush, among others. Capitol issued his self-funded EP, Country and Cold Cans, that summer, and before long he had begun sessions for what would be his seventh full-length release for the label in 11 years. "Bourbon in Kentucky," a duet with Kacey Musgraves, was the first single from the sessions, but it flopped upon its June 2013 release, going no further than number 40 on the Billboard Country charts. A second single, "I Hold On," quickly followed and went into the Top Ten, but the lack of success of "Bourbon in Kentucky" was a factor in pushing back the release of Riser; it didn't appear until February 2014. Bentley rebounded with Riser. The album debuted at number one on Billboard's Country charts -- it went to six on the Top 200 -- and generated three major hits: "I Hold On" and "Drunk on a Plane," which both peaked at three on the U.S. Hot Country chart and went platinum, and "Say You Do" which topped out at five. The title track sustained momentum on radio in 2015, and in early 2016, he returned with "Somewhere on a Beach," the first single from his eighth album, Black. Both the single and subsequent album topped Billboard's country charts with Black also landing the number two spot on the Top 200. Bentley returned in early 2018 with "Women, Amen," the lead single from his forthcoming album The Mountain. "Women, Amen" was one of two Country Airplay chart-toppers from The Mountain, the other being "Living," which went to number one in 2019 after the Brothers Osborne duet "Burning Man" topped out at two. The parent album debuted at number one on Billboard's Country chart and number three on the Top 200. During 2020, Bentley concentrated on his side project Hot Country Knights, a simultaneous send-up and homage to the rockin' country of the '90s. Hot Country Knights released their debut, The K Is Silent, in May 2020. ~ David Jeffries & Steve Leggett, Rovi