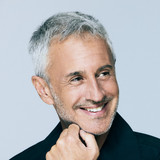 Spanish pop singer Josep Sergi Capdevila Querol, known as Sergio Dalma, was captivated by R&B music at a young age, listing James Brown as one of his favorites. Born and raised in Sabadell, just north of Barcelona, Dalma started singing along with his Catholic school's chorus and later participated in a band with classmates from the Pau Vila Institute. In 1989, Dalma debuted as a professional musician with Esa Chica Es Mia, followed by Sintiendonos la Piel in 1991. That same year, the artist came in fourth place at the Eurovision Song Contest, representing Spain with "Bailar Pegados." A year later, Adivina was released; it topped the charts, thanks in part to the single "Ave Lucia." In 1993, Dalma was invited to Viña del Mar International Song Festival, participating in the panel of judges and performing in front of his biggest audience thus far. In January 1994, Dalma married model Maribel Sana, and the couple had their first son in August 1995. Following that important family event, De Colección was released after he signed with PolyGram. Dalma's releases of the late '90s and early 2000s continued to chart well in Spain, but 2008's A Buena Hora marked a more mature Dalma and also became a commercial breakthrough. It marked his first platinum album in Spain, and began a run of smashes that crested in 2010 with Via Dalma. A record of Spanish-language versions of popular Italian songs, Via Dalma was produced with help from Claudio Guidetti (known most widely for his production of Eros Ramazzotti). The album spent seven weeks at number one in Spain during 2010 and 2011, eventually reaching platinum status six times over. Guidetti also returned for a second round, Via Dalma II, which was released less than a year later in November 2011; it nearly equaled its predecessor in popularity, and spent five weeks at the top. Cadore 33 followed at the end of 2013; although it was recorded in Italy with help from Guidetti, it included all-original compositions. It too reached number one in Spain. He followed with the more guitar-based Dalma two years later; produced by Pablo Cebrián and recorded at the Arcadia Studios in Madrid; it marked the first time the artist had recorded in Spain in more than a decade. The set hit the number two spot on the country's album charts. In 2017, Dalma returned once more to his version of the Italian musical universe with Via Dalma III, the final installment of his concept albums dedicated to Italian music. The set included a dozen songs associated with disparate artists ranging from Lucio Dalla and Domenico Modugno, to Drupi, Toto Cutugno, and Matia Bazar. Produced (like its two predecessors) by Claudio Guidetti, it was recorded entirely in the Cadore 33 studios and topped the Italian charts. Dalma celebrated his 30th year in music in 2020 with the release of Sergio Dalma 30 y Tanto, which featured reinterpretations of 30 of his best-loved songs. ~ Drago Bonacich, Rovi