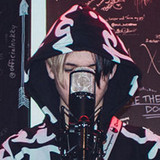 At the young age of 15, julieN had already demonstrated significant music industry merits; his first official release Anastasia amassed over 200,000 streams before he was 16. At an early age julieN was influenced by rappers like Eminem, Big Sean and Lil Wayne and, by singers like Justin Bieber, Adam Levine and Bruno Mars. Even when he struggled with a variety of negative outside influences, julieN rose from the dirt with determination to continue forward. Now 18, julieN is finally staring to step out of his shell and become himself. His current inspirations, outside of his own life, include Lil Peep, XXXTentacion, Craig Xen, Joji, Billie Ellish and many more. julieN's ambitions are honest; to touch as many people as he can through his music by combining many different styles and genres to his works. julieN pours his heart and soul into the lyrics and, tends to remain unpredictable.