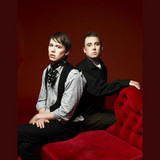 Magnus Zingmark and Oscar Simonsson are responsible for the groundbreaking music that appears under the name Koop. Inspired mainly by jazz musicians, but also learning from the work of hip-hop and dance artists, Zingmark and Simonsson formed the group in the midst of the fertile Swedish jazz scene. After meeting in Uppsala, the pair moved to Stockholm and began working with a series of collaborators, releasing their debut full-length in 1997. Sons of Koop inaugurated a new sound for Swedish jazz and gained the recognition of fellow European jazz/electronica fusion figures Jazzanova and Kruder & Dorfmeister. In 2001, the group delivered Waltz for Koop, an album that validated their exploratory style and borrowed the talents of two female vocalists, Cecilia Stalin and Yukimi Nagano. Following its release of Waltz for Koop, Compost released singles for "Summer Sun" and "Bright Nights," both featuring remixes. The remix album Waltz for Koop: Alternative Takes followed in late 2003, although their proper follow-up, Koop Islands, wasn't released until 2007. ~ Mario Mesquita Borges, Rovi