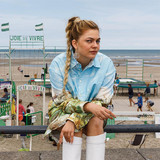 Sandy-voiced French singer and actress Louane Emera aka Louane (born Anne Peichert) found fame as a contestant in the second season of France's The Voice in 2013. Though she didn't make the finals of the singing competition, she was cast as one of The Bélier Family in the 2014 film, which featured her singing several songs including Michel Legrand's "Je Vole." She won a César Award for Most Promising Actress for the film. That same year, she released her first single, "Jour 1," which hit the Top Ten in France; "Je Vole" climbed to number two; and she appeared on two covers collections, We Love Disney, Vol. 2 and La Bande à Renaud, Vol. 2. Her debut album, Chambre 12, arrived in 2015 and went to number one on France's album chart, also charting in Belgium and Switzerland. ~ Marcy Donelson, Rovi