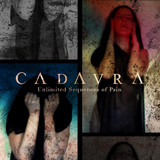 Cadavra’s sound has been influenced by different music genres and types of art, reaching its own musical expression: a dark-shaded alternative rock, quite gloomy and alluring. This project experiments a constant search; musically looking for different sounds, lyrically exposing inner thoughts, reflections and human emotions. First album Confesión Cardinal, released by Indie Label “Gallina Mística” in 2010, was distributed in Latin America and France by FuneART Experimental Label and FuneART French Division. The album is about unveiling hidden feelings. In 2015 Víctima the second album was released, distributed by Belgian label OVRDS Music, issued digitally in Europe and USA. Víctima is about how we turn into victims of our own decisions, compulsion and addictions. Same year, the single Sorrow Box was released. This song is about child abuse and its tragic consequences. Insoluble, was released in 2019, distributed by Belgian label OVRDS Music. It is a reflection about some paradoxes of life, many of them indecipherable for humans. Unlimited Sequences of Pain was released in 2020, distributed by OVRDS Music. This piece of work is about suffering, perhaps triggered by the pandemic.