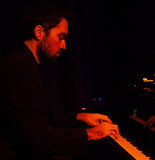 Istanbul-born Baturay Yarkın (1991) is one of the most gifted pianists of his generation. At the age of 12, he won 3rd place for European Young Pianists. After his graduation from classical piano education for 12 years & industrial engineering (bachelor), he has been a jazz and tango pianist in high demand.  Baturay & Nağme (his sister), established Yarkin Duo in 2016, released One (2017) & The Colours of Anatolia (2019). Duo’s repertuar, which consists of different genres coming from old cultural roots, performed & gave workshops at prominent festival stages in Turkey, England, France, Holland, Italy, Crotia and U.S.A.   The artist worked with Grammy-awarded musicians such as Sandeep Das, Wu Man and Shane Shanahan joining 3. & 4. Silk Road’s (established by Yo YoMa) GMW in States.   After recording his first trio album Su (2018), he made Turkey tour in 15 universities with his band Baturay Yarkın Trio & Nağme Yarkın within his project The Colors of Anatolia, which combines Jazz and Turkish Music and was sponsored by Republic of Turkey Ministry Culture and Tourism.   Baturay wrote his Master thesis about Argentine Tango Music at ITÜ (Music Theory and Composition) & Codarts (World Music); now, he is in Proficiency in Art (doctorate) & has been lecturer at İstanbul University State Conservatory Jazz Department since 2018. Baturay has 6 personal albums & multiple albums in his discography.   His latest album “Hope” is out now.   www.baturayyarkin.com