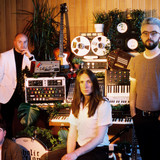 When Catholic Action re-emerged in October 2019 with the single One Of Us, it was met with a fevered response. Instantly finding a wealth of support from Annie Mac and Jack Saunders on Radio 1, Huw Stephens on 6 Music, John Kennedy on Radio X, and hitting #1 on the Amazing Radio chart, it picked up further attention at NME, DIY, Clash, The Line of Best Fit, Dork and the Independent - as well as additions on Spotify playlists including New Music Friday and The Indie List. One Of Us marked an urgent and frenetic return. Having just wrapped up a headline UK tour, playing material from forthcoming new album Celebrated by Strangers for the first time, they are also among the first names to be announced for SXSW 2020. New album Celebrated By Strangers is released March 27th via Modern Sky (World) and Palo Santo (North America) Records.