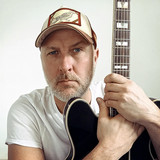 Love on Drugs, or Thomas Pontén and band, curiously and passionately blend americana and indiepop, mixing influences from both sides of the pond into a rare and unique cocktail. His music has been compared to among others World Party and Teenage fanclub but also legends like Neil Young, John Lennon and David Bowie. Thomas mainly feels kinship with artists and bands that are a bit ”all over the place” genrewise. Namely Bob Dylan, Joni Mitchell, XTC, David Bowie, Kirsty MacColl, The Band and Elvis Costello to mention a few. German Folkworld describe the music like this: ”This is on the rockier side of folk-rock.They definitely establish a nice groove, which gives this the edge over many other bands you hear playing in club land”. Love On Drugs has played with among others Ted Russell Kamp (US), The Mommyheads (US), Pi Jacobs (US), Sarah Macdougall (CAN) och Gordie Tentrees (CAN).