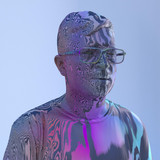 Mark Pritchard has released tracks under a multitude of guises while rifling through almost as many electronic music forms. The England-raised, Australia-based producer could be called a dilettante, but the caliber of his collaborators -- including Global Communication partner Tom Middleton -- combined with the reverence accorded to the labels that have released his work, demonstrate that he's a respected and accomplished polyglot. Pritchard's commercial peak came early in his career with a novelty single that placed him in the U.K. Top Ten, as well as on Top of the Pops. He then went about building an exceptionally diverse and remarkably consistent catalog of underground dance music that continued to evolve well into the late 2010s. In 1991, as one-half of Shaft, Pritchard debuted on an FFRR subsidiary with "Roobarb & Custard." One of several frolicsome hardcore techno tracks to sample the theme of a bygone children's television program while referencing the popular psychoactive drug ecstasy, it peaked the following January at number seven on the U.K. pop chart. The following year, Pritchard debuted his techno-oriented Reload alias on Evolution, a label he co-founded with Middleton (aka E621), who also became a production partner. Pritchard and Middleton's alliance led to ambient and house work as Global Communication, including the landmark 76:14 (1994), as well as varied approaches as the Chameleon (LTJ Bukem-issued drum'n' bass), Link & E621 (physical IDM), Jedi Knights (funky neo-electro), and Secret Ingredients (sample-happy house). Evolution was the label for most of these incarnations and supported early endeavors by Matthew Herbert and Danny Breaks. Another Evolution highlight was Pritchard's sublime deep house track "The Push" (1996), credited to N.Y. Connection. Pritchard wasn't as active with Middleton during the 2000s and early 2010s, though the duo executed DJ mixes for the Fabric and Back in the Box series. Beside a slew of collaborators, including Antipop Consortium rapper Beans, Opus III vocalist Kirsty Hawkshaw, grime renegade Wiley, and Sa-Ra member Om'Mas Keith, Pritchard continually made stylistic diversifications. As Harmonic 33, he and Dave Brinkworth synthesized laid-back hip-hop and library music, while solo vehicle Harmonic 313 was inspired more overtly by Detroit's rap scene as much as his earlier approach was guided by love for the city's techno pioneers. Phat Kat and Elzhi, a pair of close Dilla associates, were featured on the Harmonic 313 Battlestar EP. Another alias during these years was Troubleman, a two-album outlet for nouveau easy listening, hip-hop soul, downtempo house, and broken beat. Pritchard had used style-specific aliases but eventually opted to use his birth name for the majority of his solo activities. Among these releases were the descriptively titled "Elephant Dub" single for Deep Medi (2010), and a trio of EPs for Warp (2013) that featured vocal contributions from veterans Spikey Tee and Ragga Twins. All the while, Pritchard continued his adventurous, collaborative ways with previous associate Steve Spacek as Africa Hitech. He eventually released a "proper" solo album, Under the Sun (2016), the recording of which was inspired by time spent working with top-tier engineer Phill Brown. Thom Yorke, Linda Perhacs, Bibio, and Beans made guest appearances. Roughly a year after it was released, Pritchard assembled a supplemental set of instrumentals, alternate versions, and previously unreleased tracks, Under the Sun (Expanded, Vol. 1). Pritchard's work with foreboding atmospheres and voices resumed with The Four Worlds (2018), an album previewed with the Gregory Whitehead collaboration "Come Let Us." ~ Andy Kellman