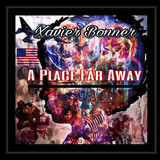 Born and raised in Detroit, Michigan he has had the opportunity to be taught/mentored by musicians such as Marcus Belgrave, Marion Hayden, Buddy Budson, Russ Miller, Steve Woods, and Wendell Harrison. Coming from a musical family Xavier knew at a early age the importance and value of music, which prompted his beginnings in the music scene. In the summer of 2013, at age 16, he toured Europe (Germany and France) with the Blue Lake Jazz Ensemble leading the saxophone section under the direction of Dave Jensen. Since then he has gone on to perform at the Detroit Jazz Festival with various youth ensembles.   Now, as a bandleader Xavier Bonner makes his way into music scene with purpose and vision. "I want to build upon what has come before me and take the music further beyond my limits." It is important for him to honor the spirit of the music that was, but not by standing still, but to propel music and artistry further. Some of his main influences as a musician include Miles Davis, John Coltrane, Wayne Shorter, Sonny Rollins, and Albert Ayler. "It’s not just their music that inspires me but it is also their philosophy on life that motivates me to be a better human being." Xavier wants to carry on that same philosophy through his music, to bring "awareness" to the many facets of life.