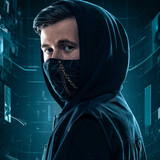 DJ/Producer Alan Walker has taken the world by storm since his debut single Faded in 2015, gathering an extensive following. Notably being one of the most followed accounts on Spotify. Now boasting more than 50 billion audio and video streams, Walker is considered a major superstar within the electronic music scene. His successful singles and collaborations include; Bruno Mars, Miley Cyrus, Coldplay, Avicii, Sia, Steve Aoki, A$AP Rocky, Ava Max, Kygo, Hans Zimmer, Madison Beer, Imanbek and many more. Together with his music and passion for films, he created an elaborate fictional universe, World of Walker, that accompanies his music videos. World of Walker contains several character plot twists and a lot of excitement to its storyline. Finally, Walker memorialised his first world tour through his movie, Aviation Movie, released in June 2021. The movie combines footage from his sold-out concert at the Oslo Spektrum stadium and a storyline of his cinematic universe, World of Walker.