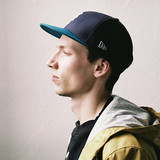 Deep Shoq is a Lithuanian producer always searching for the best proportion between atmospheric footwork, mellow future beats and other contemporary electronica flavours. A member of Singapore-based Darker Than Wax label has been nominated in National music awards as one of the Best Electronic Acts in the country (2015, 2016) as well as become a winner of 2016 national Live Beat Battle. Deep Shoq, who‘s been studying piano since childhood for 12 years, emerged as a solo musicmaker in 2009, pursuing the future side of beats. As a producer, he has six EPs under his belt. His music has been validated by the likes of Mixmag Bass charts, was featured on BBC Radio 1 as well as Boiler Room Debuts series and compilation by Adult Swim.