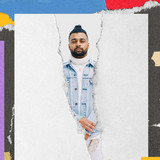 After years of development, 2014 proved a realization for Buffalo, NY native John Jacob Hannibal V to become a Pop singer + producer, bringing light to Hvnnibvl - derived from his surname, though the “A’s” are replaced with “V’s” to represent his title. HVNNIBVL catapulted in 2016 with songs Lose and No Cover, which charted on Spotify UK’s viral listings in June 2016 and February 2017. 2017 also included openings for Lil Uzi Vert, blackbear, Poppy, THEY., & more. The year's big single, On & On & its remixes proved to be a success, as the Evix remix gathered over 1.2 million plays on Trap Nation while the original was featured in Clash. Highlights of 2017 collabs include vocal feats with duo It's Different, amassing millions of streams w/ Will You I Will on Lowly. & Holding On on Strange Fruits 🍉 In 2018, HVNNIBVL saw most success through collaboration with KDrew on their single Body of Gold. More Than Enough also received great notoriety. In February 2019, HVNNIBVL relocated to Los Angeles, CA, paving his way in LA through headlining spots at UCLA and The Satellite, as well as notable releases with FelMax and With Løve. 2020-2021 has thus far been larger scale, through writing w/ Alexa Ayaz (Do Me Right features Roc Nation artist Casanova), production on Semper by Last Verse (feats in Shameless Season 11 and All American Season 3), & the self composed Reasonably, Relative EP - which gathered most attention w/ the singing off of single Wake Up to Universal Music Group.