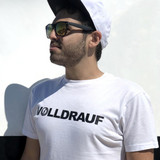 Volldrauf was born and raised in Cologne, Germany. Starting from a very young age he found himself heavily drawn to house, electro and trance. This was when he learned how to play the piano and write his own music, which led him to quickly discovering his dream. His passion and love for dance music continues to feed his creativity. At the age of 13, Volldrauf moved to the United States and found gigs DJ’ing for parties and events. By 18, he was playing in clubs. Since then, he has headlined and played at various clubs and venues all over San Diego such as Bassmnt, Fluxx, Hard Rock, Infinity NYE, etc. Volldrauf has had the pleasure of seeing his production work, including his original tracks, make the top charts on YouTube, Spotify, and Soundcloud.